skip to main | skip to sidebar

The bloom above is found on the Thorny Kapok, commonly known as the Cotton Silk Tree. Here's what some look like in the Caribbean:
http://www.stjohnbeachguide.com/Kapok.htm

Attempting to link to October Poems Flip Book - let's see how it goes . . .

From First Library to Last, chapter one 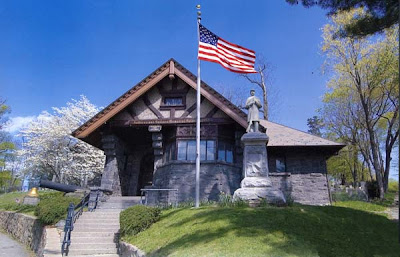 
All that memoir-ing by Village Bookshop writing group members the last few years may finally have rubbed off on me. Here's a first draft attempt.

The house we lived in on Long Island was built late in the year I was born, and we moved from 8 Glade Lane, Levitown to 51 Turtle Cove Lane, Huntington, sometime in 1953. My parents were increasingly eccentric in their modifications to the house, which had one long room across the back with three "rooms" that were eventually divided by large sliding wood doors. After the inside east wall of the corner room was taken out -- far too early for me to remember -- most of the ranch-style house's rearside rooms could be viewed from my corner by the mulberry tree. A jalousied door to the outdoors was installed, allowing me to roam off into the yard from my interior domain. I have always associated gardens with books, creaking wooden floors and avian species ever since. Almost immediately a temporary move landed me and my small hoard of belongings in the den (later piano room), between my original room and the living room. The installation of my father's hand-hewed library was underway. After the construction was complete, I regained my corner space. Throughout the rest of my childhood in the Long Island house, I slept in the library. Among my favorite real childrens' books when very small, were Robert Louis Stevenson's A Child's Garden of Verses, and Defoe's Robinson Crusoe, which my father read aloud to me every evening he was at home, until we finished.
.
.

I remember the birds, identifying them in the Audubon Guide, and learning each one's name as they came to the feeder in the Mulberry Tree outside the window. The window was set into the built-in shelves, with a smooth mahogany stain surface covering each board along the entire west wall. Hundreds of books with which to wile away rainy and snowy days. Dad was a big Book-of-the-Month Club and Scientific American subscriber, so there were always interesting magazines, numerous histories, historical novels, and some of my mother's quaint early finds. And of course, the religious tomes -- which seemed to multiply later -- ignored unless required to peruse, except for that folio-size book in its slip case with the Gustave Doré prints.

Entering the room in my memory, window cranked open, early autumn, Slate Juncos, Cardinals, Orioles, Robins, Nuthatches, Grosbeaks, Jays and Grackles all sounding their calls into the crisp air. The oxblood encyclopedias were massive. I didn't pull them down unless there was a school project to research. My own white and green set arrived in 1964, invaluable addition for that report on clouds in the 2nd grade. The adult books were on the top shelf to the right, out of my reach unless the step ladder was brought from the garage. Although that section always drew my curiosity, "adult" is here defined in a pristine 1950's sense. Within reach, there were plenty of reading resources to capture the imagination, and several art books the young biblio-explorer found utterly fascinating. The Dante with the Doré prints was a perennial. It was my Stephen King. I had to have Catholic friends help me sort out the context, but I always understood that it was someone's imagination at work, not a real place Mr. Aligheri envisioned. The Stories To Remember, two-volume set, by Costain and Beecroft, with sections by Kipling, H. G. Wells, Dumas and Hawthorne were a source of great enjoyment, and I came back again and again, especially to re-read Robert Nathan's Portrait of Jennie. At school one day, I proudly showed off a copy of Pasternak's Zhivago I'd filched and put into my bag, along with a rather naughty book, intended to humor adult readers with stories and pictures of the Devil and all things perverse. Nothing like risqué cartoons to make one a ton of new friends. It was at this time Hammond Innes' Wreck of the Mary Deare had a profound effect on me. I sought the author's works out several times at the public library after my initial introduction, and enjoyed his tales of New Foundland and Labrador.

In those early years, say between the ages of 5 and 12, the over-arching program was to inculcate Doug in all things Protestant. If the chosen community was a bit sectarian and narrow in scope, at least mom and dad's version of the denominational program had a wide ranging reading list. Mother always worried about my being hauled off by the papists our neighbors the Norman's represented. Funny, she didn't have that problem with Barney, who merely wanted me to come and hang out with him at the synagogue after school and learn Yiddish. During this time my parents had a revival of sorts and returned to church -- mostly, I believe for my benefit. The result was the reading of three chapters of the Bible each evening after supper, and for me, lots of Uncle Arthur, inspirational missionary stories, and tales about delinquents who straightened up under the direction of stiff Jonathan Edwards types. Consequently, I probably read the good book through five or six times before the wayward years of hormonal surges led me off to J. D. Salinger, Leonard Cohen and the salacious lines of my poet-father, Whitman. It just now comes back to me, that much later, one of Arthur's four sons was my professor for the History of Religion in America course during graduate school. The horrible things higher education does to our poor, innocent children! I must save somethings for later, but it was at that future juncture, around the age of 25, that the 19th century context of the religious movement I was brought up in became clear.

Back to the early 60s for now: it was my good fortune, that as involved with peripheral crackpot Adventist writers as mom was, dad had a love for American originals. There was always a grounding, because of him, in Emerson, Franklin, colonial and Revolutionary lore. It occurs to me now that his genes were much closer to the free-thinking enlightenment rationalists who founded the nation than he ever could have imagined, or would freely admit out loud. Sure, there were the congregationalist deacons, and the separatist great migrationists in our shared past (I know something about now because of someone else's genealogical work) but it seems, that in spite of his college training toward ministry, my father secretly had more use for Thomas Paine than the church's own prophet.


In the center of the wall, above the window, was the set of Dickens that is still here with me, fifty years later. I remember in 7th grade toting the Oliver Twist around, in order to soak it up for the dreaded book report assigned. You are familiar with study by osmosis, right? You can tell this even now by how it is more worn than the other volumes. That's when I realized how difficult it was to bridge the space between the private pleasures of reading, and communicating the experience to others. That year we also read Les Misérables. This was the first time I found myself moved and challenged by social gospel readings outside my own faith. I began to recognize a bothersome conflict between what I was hearing about the evils of novels from church leader-types, and the substantial humanist contribution of writers like Dickens, Hugo, Sheldon, and the even earlier, Harriet Beecher Stowe. Meanwhile, I was perverting my tastes at the Huntington Public Library, and delving into the mysteries of science fiction. There was a wonderful sense of freedom when ma would drop me off at the new library, and return hours later from shopping. It was the old library of early childhood though, that held the fondest memories. Known as The Soliders and Sailors Memorial Building (see photos), it had more the feel of a museum than a library, and it fueled my love of all things books.

The kids' fare that I first chose to read in the wider world was offered by the school libraries at Washington Drive Elementary, Toaz Jr. High, and Finley Jr. High. The usual diet of black stallions and young detective novelettes, Jules Verne, H. G. Wells, and Pierre Boulle. Following my exodus to Massachusetts for high school, I may have been the only one in the boys dorm at Pioneer Valley Academy to have my own subscription to the SciFi Book Club. The first time I remember wanting to read everything one author wrote, was when Ray Bradbury showed up with Farenheit 451. Bradbury, oddly enough, also introduced me to Teasdale in our sophomore lit text, in the short story named after her poem, "There Will Come Soft Rains."

Another reinforcement for my bibliophilia? Why my own portable library of course! For my desk at boarding school, Dad built a beautiful natural wood three-tier bookshelf to exactly fit the top edge of the student's desk in the dorm room -- which could also be disassembled and easily carried off. Leave it to the draftsman. High School was a time when literature began to really open up for me. During my sophomore year, as I ploughed through the 10th grade American Lit text, I felt quickened. How's that for a 19th century expression? Revved, jazzed, excited!~ Shortly thereafter I bought the pocket Whitman at Oscar's bookstore in Huntington, and to use Emily's expression, my head was blown clear off.
Posted by L. D. Knowlton at 7:37 PM

Florida, which now, unbeknownst to all residents has surrendered to the ever-expanding Conch Republic